Bird Watching? It goes both ways. 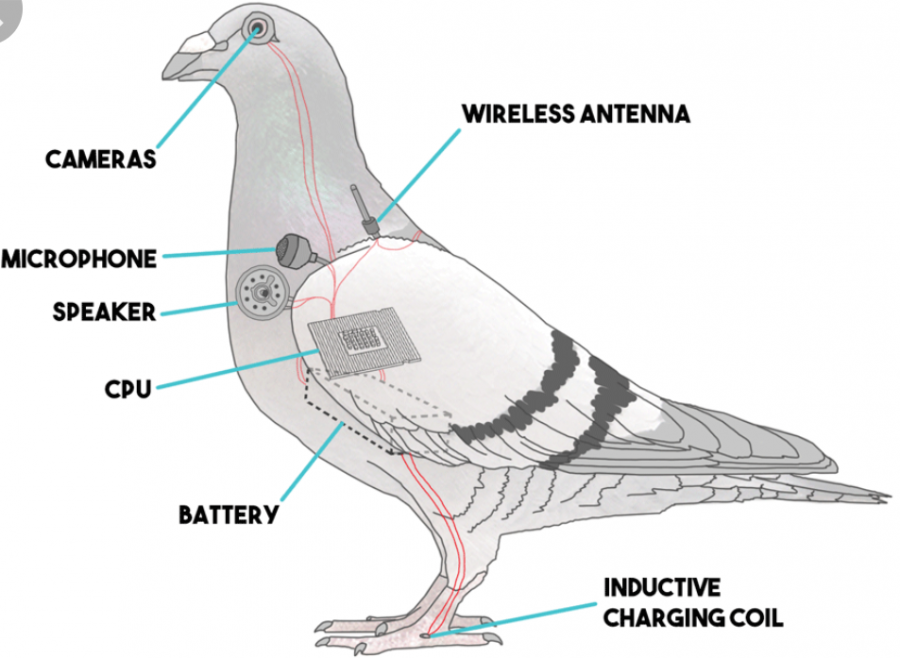 A diagram of the inside of a government surveillance drone.

Is your role model Indiana Jones? If so, the new anthropology elective is for you.  This class has been in the works by Dr. Yeakel and Mr. Bullington since the fall of 2019.  It functions as an “introductory course into physical and cultural anthropology”.

The class does not have any tests.  Instead, students are evaluated by writing and presentations.  They just completed a two and a half week long activity in which they had to role play as citizens of Victorian London.

Recently, the class was assigned a project in which they had to utilize critical thinking skills to examine the logic behind conspiracy theories.  They used a method by the acronym “FiLCHeRS”, devised by a professor named James Lett.  I decided to use this method to test my favorite conspiracy theory, “Birds Aren’t Real”, or BAR. (Note: This is a satirical conspiracy theory.)

In order for the claim (or in this case, conspiracy) to be true, it has to be falsifiable.  The 2evidence must be so important and foundational to the claim that if the evidence proves to be wrong, the whole claim is disproved.

This one is pretty self-explanatory, but basically all arguments provided in support of the claim must be sound.  All premises must be true.

The main claim of Birds Aren’t Real is that in the 1960s, the CIA began to replace all birds with government surveillance drones.  Kennedy did not agree with it, so they assassinated him.  The United States then inserted themselves into the Vietnam War to harvest precious metals to continue to make these robot birds.  Now, what the general public perceives as “birds” are actually cameras.  While the claim sounds far-fetched, it follows the rules of logic.  If birds aren’t real, then what were previously known as birds were replaced with government surveillance drones because the United States government needed a new way to keep tabs on its citizens.  Therefore, the Birds Aren’t Real conspiracy passes the logic test.

Technically, there is no evidence against the BAR theory.  We can’t revive Kennedy and ask him why he was assassinated, nor can we demand to see the CIA’s confidential records.  Therefore, all available evidence is being taken into consideration, and Birds Aren’t Real passes the comprehensiveness test.

This one is also very self-explanatory: all evidence must be true and evaluated without deception.

If any evidence is the product of experimentation or can be seen as coincidental, it must be able to be repeated in more trials or examinations.

As of yet,the theorists haven’t been able to successfully capture a surveillance drone (“bird”, if you will).  Because of this, there has been no testing or experimentation.  Technically, Birds Aren’t Real passes the replicability test on a default.

The BAR conspiracy is still trying to obtain concrete proof.  This is an extraordinary theory, however, their supposed evidence (real CIA documentation) is also extraordinary.  Birds Aren’t Real, while seemingly crazy, is a physically possible concept, and therefore does not fall under the category of paranormal.  Therefore, the Birds Aren’t Real theory has yet to pass or fail the sufficiency test.

Overall, the FiLCHeRS method is a solid system for determining the validity behind claims and theories.  Due to Birds Aren’t Reals’ satirical nature and audacity to completely falsify “evidence”, it does in no way pass the FiLCHeRS test.  However, if one chooses to completely abandon all reason, then they can see it as a valid theory.

The anthropology class is still young, but has already gained traction.  Dalia Handoush (‘21), a student of the class, described it,  “It’s a really great class to take and [the class] gets you on different thinking levels.  You get to experience different types of learning and that’s important for students, since we are used to the same types of class structures.”