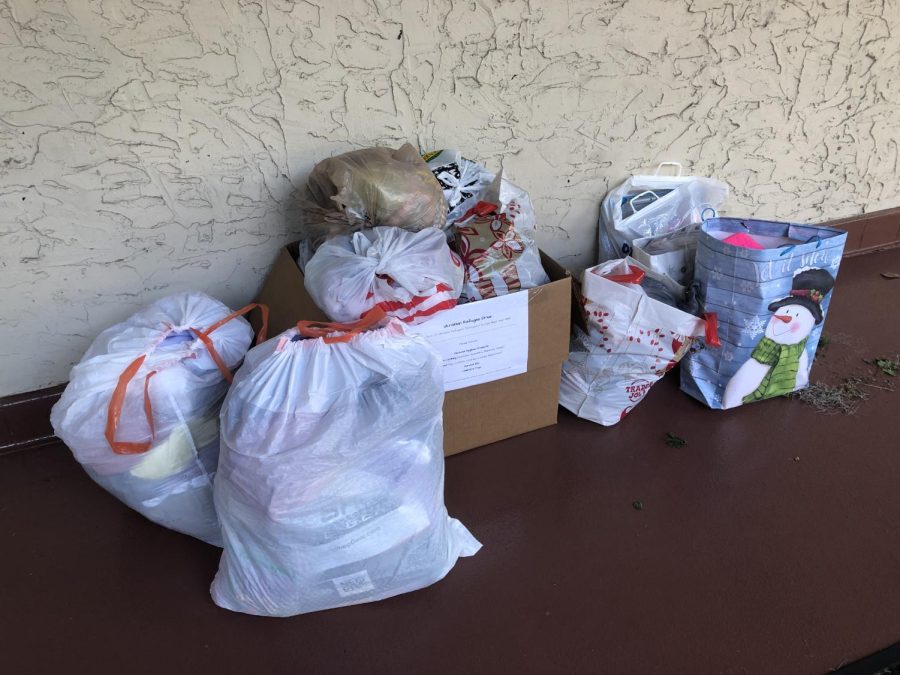 One of the many supply drive propositions for Ukraine gathered an overflow of toys, clothes, and other personal care items in a bin placed in Schultz.

Students of all grades, of all backgrounds, and of all missions choose to run supply drives every year. Just this year alone, there were around 10 supply drives, from pet supplies to prom dresses to paper products, that stem from both clubs and organizations and even the ideas of individual students. With both successes and shortcomings, the Bolles supply drive scene can be characterized by the experiences of the students who run them — as a result, featured below is a collection of individual student stories that demonstrate the diverse affairs of student drives.

Senior Emma McAdoo (‘22) is the Animal Advocacy club president. She has run several drives on campus in order to receive “dog food, cat food, toys, blankets, and paper towels” as donations towards the Humane Society.

The Humane Society holds a special place in McAdoo’s heart as this is the shelter where she got her dog. Even though McAdoo did not coordinate these donations with the society since it was anonymous, the drive was a huge success. The bins were around campus for two weeks allowing students to stop by and drop in their donations. For the weeks the drive was up, McAdoo made several trips to her car and dropped off supplies with her mom. Emma said, “I usually just come by and check up on them and carry the supplies either to my car or Mrs. Moyer-Shad.”

“I think the original thing that made me want to start doing supply drives was volunteering at the shelter,” McAdoo said. The Humane Society has a large bin located inside which is how Emma got the idea to start the drive. She saw blankets and toys inside the bin and realized it was a great way to donate.

Not only does the Animal Advocacy club hold on-campus drives, but they also sell bracelets to raise money. At the beginning of April, she advertised for the sale, which sold jewelry crafted by a relative of hers, and posted pictures of them on her Snapchat story. The sale lasted from April 25-26 on campus.

When Maddie Kaiser (‘24) started collecting gently used and new toys for children in El Salvador, she did not expect crowds of new toys to overflow from bins on the Whitehurst Campus.

Her supply drive took place during the last two weeks before Winter Break, and Kaiser ended up with approximately 320 toys from both the Whitehurst and San Jose campuses. “The whole lower school office was stuffed with toys. It was amazing.”

But Kaiser’s drive was not like most others – she was not affiliated with any club. When a friend of hers achieved a successful drive for Afghanistan – without the name of a club attached to it – Kaiser discovered that students could propose, develop, and run supply drives by themselves.

“This is something that a lot of people don’t know; any person on campus can do a fundraiser once a semester or a drive once a semester without any kind of club affiliation,” Piper Moyer-Shad, Assistant Head of Upper School, explained. “Maddie didn’t even come from a youth group, church, or anything. She just said, ‘I have this family friend that comes from El Salvador,’ and I was like let’s figure this out!”

Even without a club to help organize and plan the drive, Kaiser still garnered major success. “I don’t think it was hard [to run the drive] because the school doesn’t really care. They’re just really happy that someone’s doing it.”
Though only spearheaded by one person, unaffiliated student drives are not necessarily less well-known. One of the most famous all-school drives, The Woodland Acres Food Drive, functions not as a club, but as an annual service project. The drive collects canned foods on all campuses to send to Woodland Acres Elementary during Thanksgiving break, a time when many kids can’t rely on meal plans.

The co-president of the food drive, Meera Kuthiala (‘23), deemed the 2021-2022 school year as one of their “more successful years.” Though COVID once again restricted the organizers from visiting the school as they normally do, hand-delivering cans and spending time with the children of the school, Kuthiala recognizes that the cans they provided – over 2000 of them, according to Moyer-Shad – made a worthwhile difference. Kuthiala said, “Sometimes these meals can last a family for the whole month.”

Moyer-Shad especially loves the Woodland Acres project for its “super labor-intensive” qualities. Unlike most club service projects, which too often entail a one-day Chick-Fil-A sale or some kind of fundraiser, the food drive, at least before COVID, sent its leaders and contributors to the elementary school itself, where students could visualize their service efforts more tangibly. “That makes an impact on your heart, but it also has an impact on [the students]. It’s character-building and it deepens your empathy; there is no replacement for on-the-ground volunteering,” she said.

However, supply drives don’t always go as expected. Having witnessed many projects come to fruition and some just not at all, Moyer-Shad notices some commonalities among unsuccessful drives. “Generally the ones that aren’t as well advertised are the ones that don’t do super well.”

But occasionally, supply drive troubles are rooted in a starkly contrasting issue: too many drives, not enough time. With the Russia-Ukraine conflict in Europe, many student groups – about six or seven – have approached Moyer-Shad with ideas to support Ukraine, yet Moyer-Shad recognizes the danger of too many drives at once. “Donation burnout,” as she calls it, may discourage people from donating if there are too many organizations from which to choose.

Yet, regardless of these issues, Moyer-Shad never turns down a student who has a mission and a plan for starting a drive. “Just come and talk to me. If it’s a feasible idea and there’s a spot in the calendar, I will work with [you] to make it work.”

For any student interested in starting a drive, both Kaiser and Kuthiala emphasize planning and passion. Kaiser recommends to “have deadlines so it doesn’t get out from under you.”

Kuthiala stresses the need to be proactive, to communicate with faculty and staff, and to demonstrate a passion for the service. “You’re gonna need more than [a message in] the announcements. You’re gonna need some teachers; you’re gonna need Mrs. Moyer-Shad. To work super closely with the administrators at Bolles would be one of my biggest pieces of advice.”