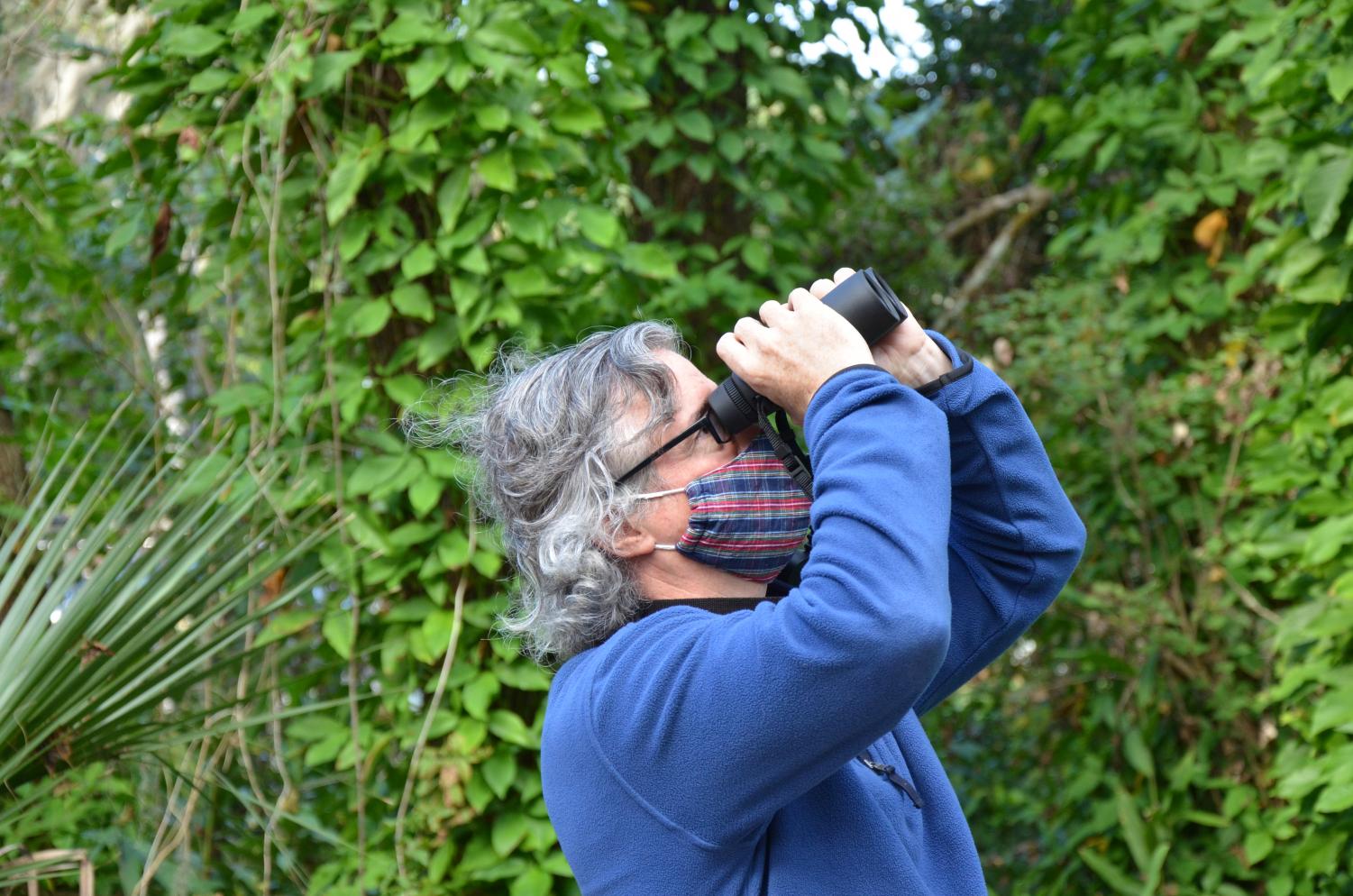 Dr. Moyer goes out birdwatching alone most Saturdays, “I will go bushwhacking into the dense Marsh and thickets where other people would say, no, we’re not doing that.”

Moyer has a deep awareness of where nature can be found around Jacksonville. “This past weekend for instance I went to Masters Tract Storm Water Treatment Plant, which is in southwest St Johns County. And I saw 62 species of the birds.”

Moyer was first introduced to birdwatching by his family when he was just five years old. He said, “I was very serious. I would pretty much memorize the bird book of the 700 species of North America.”

“If you asked me when I was 11 years old,” Moyer said, “what I wanted to be was a bird scientist, ornithologist.”

Moyer has incorporated his passion into his curriculum at Bolles, “the students learn the 75 noticeable birds of Jacksonville, maybe four or so species per week with periodic quizzes.”

Five years ago Moyer installed bluebird boxes around the San Jose campus, to help aid “the lovely and charismatic” bluebirds in nesting. Since then he has spread bluebird boxes across several locations; including all four of the Bolles campuses, local parks, and even a school in St. Johns county. Moyer states, “We’ve produced 473 babies over the last five years.”

Moyer, who named his family business Bluebird Pharmacy, maintains the bluebird boxes from August through February. He said, “Takes me an hour or two more to sort the data and I upload it to a citizen science website.”

Moyer has an impressive life list of birds he has seen, “I used to diligently keep a life list, up to over 1000 species.”

Moyer traveled to the Antarctic adding to his life list. He spent, “It was almost a month on an icebreaker ship, and we saw all sorts of penguins and albatross and things like that.”

“But I’ve been to Tanzania, the Amazon rainforest, Australia, a couple of times.”

In his travels, he’s seen some amazing birds. “I saw it actually in the cloud forests of Costa Rica and that was a quite special moment because it’s a lovely bird. It’s emerald green and and bright scarlet red and has a long flowing tail.”

Moyer mentioned also the Elfin Woods warbler in the mountains of Puerto Rico, “That was an unexpected bird you can only see on that island.”

But there are still a few species that Moyer would like to see in the future, “So many when I have time to travel around, but in Northeast Florida the Swainson’s Warbler comes to mind. That is one I have never seen, and you can only see it during migration, and it hangs out in the densest foliage so it’s extremely difficult to see.”

He chuckled, “But one of these days I’m going to see it, and maybe I’ll get a photo of it so other people will believe me.”

But despite what might seem like an obsession for birds, Moyer considers himself not as intense as you’d think. Moyer said, “I’ve been trying to focus on learning the native wildflowers more the past few years.”

Moyer wants students to know that the campus is a great place to observe different species. He believes there are, “I don’t know, it’s over 100 for sure, maybe 125 (different species) I haven’t checked recently. But for instance, right now there are ducks coming down for winter and will be out on the river. There will be some interesting species of ducks in a couple more weeks, so taking the spotting scope out and checking those out is cool.”

Moyer hopes that engaging with nature will lead bird watchers, especially the members of the school’s Bird Club, to be environmentalists. “I’d like to raise awareness of these species so people have a greater interest in perhaps conservering land and species.”

But Moyer notes that to really see nature, you have to be on nature’s schedule and birds are most active when feeding early in the morning. He said, “I like to get out there at the crack of dawn.” 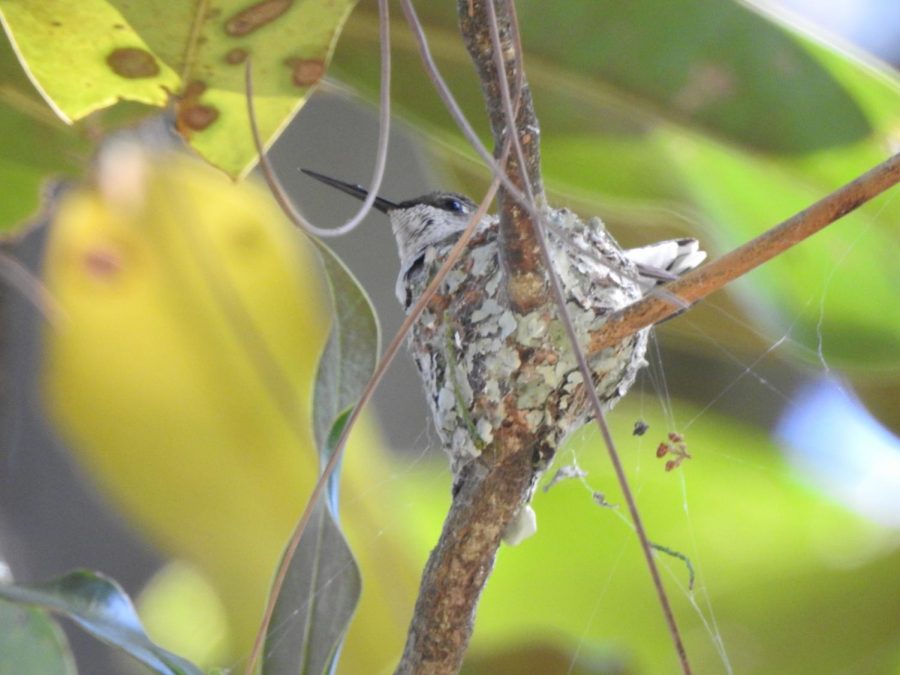 Gallery|4 Photos
A female ruby-throated hummingbird
Katie Creveling, Contributing Writer
Senior Katie Creveling is a second-year contributing writer and photographer. She enjoys hanging out with her family, her two dogs, and two cats, and loves literature and writing. With her strong independence and work ethic, Katie hopes to go into political science. 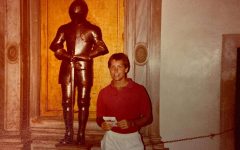 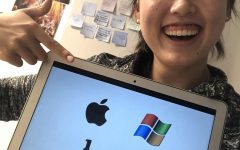 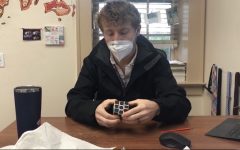 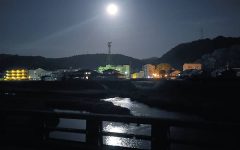 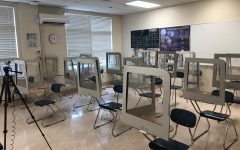