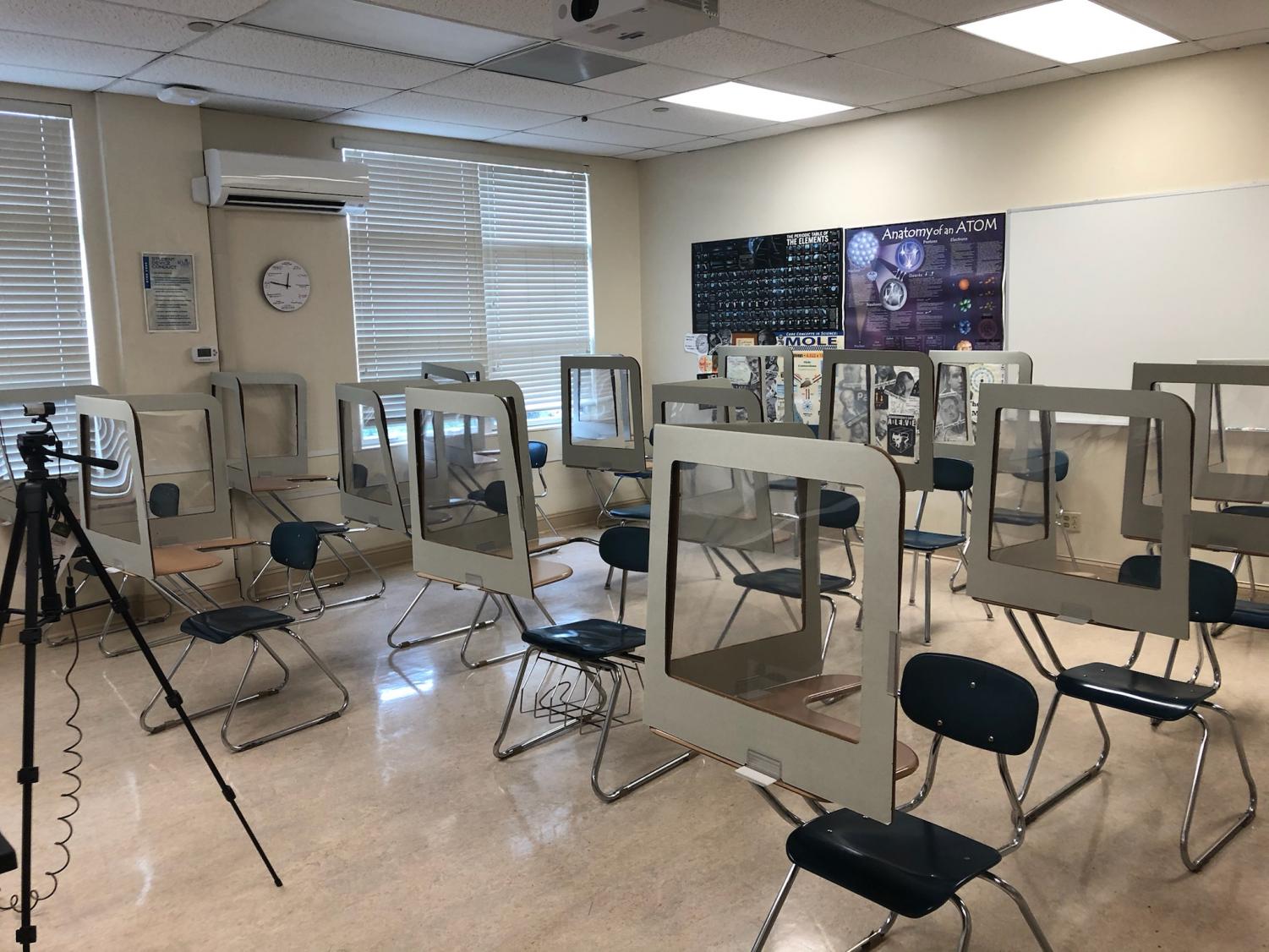 School is well under way, and teachers have adapted to the new school “norms,” precautions taken to prevent the chance of COVID-19 spreading even if that means sanitizing your hands before you pass on a pen, not softening a bad grade with a smile because the mask hides it, and a classroom divided between virtual and in-person attendance.

“It is challenging to split my time to give both groups attention,” Chemistry teacher Mr. Bullington said, describing his experience with the new norms. “Trying to stay aware that you have students both here in the class and at home and trying to give them the same equitable experience.”

Mr. Bullington enjoys having labs and in-class activities during school, but with COVID-19 and a hybrid class he had to rethink the way he approaches his lesson plan. “We’re in this landscape and trying to navigate it and the question is, what is best for the students?” Mr. Bullington said as he works to make his class as interactive as possible. “I enjoy a fluid class dynamic.”

Every teacher wants their students here.”

To do this, Mr. Bullington explores different ways to simulate an in-class experience, opting to do more virtual labs in addition to his lectures, PowerPoint presentations, and discussions VIA Schoology.

He admits, despite the challenges of the virtual divide. “The way I teach hasn’t changed.”

Despite being back around “living students and being able to joke around and just see the person,” History teacher Ms. Fluegel worries about class camaraderie. “Between the mask, the plexiglass, and me, I just feel like the contact, the human connection… so hard to make it,” she says, “I’m trying to make a connection that should be much more natural and much easier.”

Due to the split classrooms, Ms. Fluegel has had to work with a more limited and less dynamic lesson plan one that, before COVID, included in-class projects, debates, and discussions.

In addition, Ms. Fluegel misses the chat that came with her daily school life. “I would have never believed that I would hear myself saying this,’ Ms. Fluegel said as she reflected on how school has changed, “[but] I miss the sort-of easy chatter that happens before class and during groupwork.”

Among everything that is happening, Ms. Fluegel reminds herself that “If a school can keep its students safe, Bolles has worked to do that. I am very grateful to the school.”

In the math department many assessments, review sheets, and homework get posted, completed, and turned in utilizing OneNote, which math teacher Rachel Marionneaux says glitches every so often.

However, Marionneaux says that the IT department is incredibly helpful whenever a substantial issue occurs. “Online learning wouldn’t be my first choice when it comes to providing instruction,” says Marionneaux,“It is important that I am building relationships with the students that I teach.”

Despite the less than ideal circumstances, Marionneaux says she is grateful for all that the school has done. “I feel supported and cared for by our administration and I know they have worked hard to make online learning effective for teachers and students.”

The Arts Department has an entirely different experience than any academic class. From visual arts classes like drawing where students need to take home their materials each night to performance based classes like dance where students do not have access to a dance studio in their own homes.

According to drawing and painting teacher Christopher Hicks, online learning is tricky because of the duality involved in the two modes of teaching. “It was a little difficult. Just to kind of master the two dances and dance [them].”

However, Hicks says that although lesson planning is now “double duty,” it’s not too bad. “At first, it’s a little difficult, but after a few weeks you master it.”

But Hicks is not unfamiliar with online learning, as he obtained his graduate’s degree entirely virtually, as well as teaching online during the beginning of the pandemic at his previous job as a professor at JU.

Dance teacher Angela Blackledge offers the distinct perspective of a performance based class. “Anything new is a challenge,” says Blackledge.

“Every room at home doesn’t look like a dance studio,” says Blackledge. However, she tries to limit the routines to or have it be able to be reduced to roughly six feet of space, for what Blackledge calls two main reasons.

One, to preserve physical distancing, and two, so that students at home can be more easily included, because according to Blackledge, that is a “doable” amount of space.

However, Blackledge says that COVID has not taken away the things she enjoys about teaching. When asked to name a few, she said affecting positivity in the lives of her students, among other things, but she said “If I had to make a list, it would have 50 to 100 things on it.”

Ms. Fluegel sums up a connection shared between teachers of all disciplines: no matter what, they are in this for the long haul, for the kids. Fluegel said, “It hasn’t changed for me because I was never really a teacher just to deliver hard facts.”

For Ms. Fluegel, being back means balancing feelings of loss with positives. “Of all the things I knew that had
to change this year, Candy Mountain was the thing that worried me most,” she said in a joking tone referring to the loss of her legendary candy stash, but, “I’m so happy to be back.”

French and Arabic teacher, Madame Phillips-Bourass, has been balancing hybrid learning, along with the virus’s effect on her life.

Madame feels she has been doing a great job with OneNote and Schoology because she had been using those two apps for a while. But Philips-Bourass laughed,“I had to get used to staring at the camera and figuring out how to organize my screens and stuff.”

Another difficulty is remembering which students are online or in class. The easiest way for Madame to plan work is to pretend as if they’re all at home each day.

Madame concentrates on timing. She said,“I have to wait for them to hear me, then for them to have a chance to turn the microphone on.”

Having students either online or wearing masks makes it hard to hear what they say, especially if they cut in and out of the audio. Many people who are not fluent cannot “put two and two together” in French like they could in English.

Madame admits how she felt “very anxious in the beginning of the year” coming back to school since her father suffers from a bad lung condition. Her father is at high risk, so her family cannot visit him in person. Thankfully, Madame says, the school has been doing a great job keeping everyone distanced and the rooms clean. With the current schedule, she has 5-6 students at a time.

She enjoys the teaching better now compared to the Spring but, “I worry about some of my students who are at home.” According to Philips-Burass some students who are new to Bolles do not yet know all the applications this school uses to submit homework or take tests.

Mr. Mulvey, English and Post 9/11 teacher, reminded students that, “The opportunity and freedoms that we have on this campus from education and pedagogical perspectives is absolutely awesome.”

One activity Mulvey misses is that he used to take students out by the river during classes for a relaxing way to do work.

Since all students are masked behind glass frames or they are behind a screen, it made it very hard for teachers to match names and faces. “It’s really a different interaction seeing someone’s face versus somebody wearing a mask.”

Most of the time, Schoology Conferences works for Mr. Mulvey, but every now and then the internet cuts in and out. Even with some malfunctions, Mulvey said, “I love the sense of normality coming to school.”

Among all the challenges, Mr. Mulvey stays positive. “I try to look at it as this is a temporary situation that we need to figure out the best things to get out of.”

Mr. Stam helped Mulvey set up a way to watch movies with his class on Microsoft Teams. He reminded students, “we’ve come a long way since Spring.”

Mulvey misses having students together in the same room, however, “You forget how fortunate you are at a place like this until some of those things get taken away.”

With the move to online learning, many students— and teachers— are looking for tools and advice for digital learning. This is Part 1 of the Apps, ...

Third Quarter Slump (noun) /THerd kwôrder slemp/ - Ever get the feeling that the third quarter sucks, we guess what IT DOES! Between winter break an...

“I teach 2 classes of chemistry and the science of diseases elective and I will be teaching anatomy in the spring. I am a 9th grade advisor, and I a...